The Problems at Bank of America 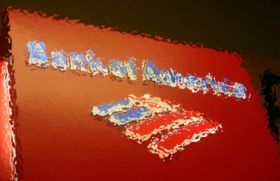 Do you hear that ticking sound?

Today it was leaked that the Federal Reserve has requested a “contingency plan” for Bank of America (BAC). Supposedly, this includes the possibility of spinning off Merrill Lynch for some extra cash.

Such a request for a plan is extraordinary. It proves that the Fed’s so-called “stress tests” are flawed. What is the difference between “if business conditions worsen” and the “adverse scenario” of the stress test?

I will argue that the flawed stress tests have given the public, regulators and the banks a false sense of security. As a result, the banking system is unprepared for a realistic adverse scenario.

BAC has been constantly in the news:

It is obvious that BAC needs to raise capital given its actions. It seems like the Fed has finally realized this. The question is: how much and at what cost?

Unfortunately, it is very difficult to decode the true health of Bank of America – or any other bank.

Let’s consider some of these transactions.

Bank of America announced the sale of the international credit card business. While most understood the sale of European, Spanish and U.K. units, it was surprising that BAC sold the Canadian unit (which was low risk and within BAC’s geography). This signaled to the market that potentially drastic steps needed to be taken to increase capital.

BAC purchased a 9% stake in CCB in 2005. In June of 2008 (at the height of the financial crisis), it increased its holdings of CCB (total 25.1 billion H-shares or about 10.75% of outstanding equity). The agreement stated that they could not sell 6 billion of the new shares until August 29, 2011. Remember that date.
See press release.

In previous postings, I have argued that the U.S. Treasury effectively bankrolled the investment in CCB.

On August 29, 2011, BAC announced the sale of about half of the CCB investment for $8.3 billion and stated that the deal would increase their Tier 1 capital by $3.5 billion.

One lesson of the 1998 financial crisis was that if you need to raise capital, you should sell the hard stuff first. The idea is that if you sell the most liquid assets now. As the situation deteriorates, illiquid assets are difficult to sell and often are disposed of at fire sale prices..

Berkshire Hathaway Inc. purchased $5 billion of Bank of America preferred stock, which has a 6% dividend yield. Berkshire also received 700 million warrants with an exercise price of $7.14 with a 10-year expiration.

When Buffett invested in Goldman in September 2008, it was widely thought that there was a real possibility that the latter was close to going down. The Goldman deal was very sweet for Buffett – and people understood why – Goldman was in trouble.

The Bank of America deal is sweeter in my opinion once you look at it carefully. Yes, the dividend yield is less (6% vs. the Goldman rate of 10%). But risky bond yields were about much higher in September 2008 and this explains the lower dividend yield.

The big difference is the warrants. In September 2008, Buffett received Goldman warrants that were set about 10% out of the money based on the previous day’s close. With the BAC warrants, the exercise price was set above the previous close – so they were immediately valuable on exercise.

But here is the crucial point: the Bank of America warrants have an expiration of 10 years whereas the Goldman warrants had only a five-year expiration. The longer the life of the option the more valuable it is. These warrants are hugely valuable.

So, the effective dividend yield is not 6% — it is essential to take the value of the warrants into account. It is safe to assume that the effective yield is at least double – and well into the junk territory.

By the way, Buffett’s investment does not count as Tier 1 capital under the new Basel III. The investment ‘counts’ today because Basel III is not yet implemented. It doesn’t count for me.

The bottom line is that the cost of this capital for Bank of America shareholders is massive and so is the risk.

Again, the regulators let us down.

On March 18 , 2011, the Federal Reserve released the results of the most recent stress tests of the 19 large U.S. banks.

I have been very critical in the past of these stress tests because they don’t deal with a true adverse scenario.

Regulators got one thing right

In March 2011, the Federal Reserve refused BAC’s request to raise dividends earlier this year. To me, it is amazing that BAC even asked for a dividend increase. Again, it indicates that they don’t understand their own risk.

We already knew that BAC was facing big suits. There is talk today of a new suit against big banks by the Federal Housing Finance Agency. Were these taken into account in the stress tests? Talk about shooting yourself in the foot.

What do we need?

The IMF’s Christine Lagarde was unfairly trashed when she argued that European Banks may require “urgent” recapitalization. What about U.S. banks?

At least Bank of America is able to raise capital. The problem is that we have no idea how much more it needs. This causes uncertainty – and given the size of BAC – systemic uncertainty. What about the other banks?

U.S. regulators need to move sooner rather than later.

Check out my iPad/iPhone app.

This entry was posted in Finance. Bookmark the permalink.

3 Responses to The Problems at Bank of America