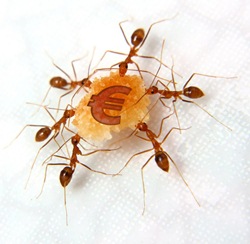 A massive €530 billion liquidity injection occurred in Europe today in the form of LTRO.

This helicopter drop does not solve the Eurozone’s problems: it merely delays them. The ECB is treating the symptoms not the disease.

LTRO is Long Term Refinancing Operations. LTRO was launched in December 2011 by the ECB. The ECB offers unlimited loans to European banks for a three-year term – at an interest rate of only 1%. The loans are unconditional – banks can do what they want with the funding.

1% is a remarkably low rate – given that most of these banks are insolvent. They would have no hope of getting terms like this in the open market.

In December, not surprisingly, 523 European banks wanted a piece of the action. LTRO1 amounted to €489B of bargain loans. Importantly, about €300B was rollover. That is, banks had loans that were due and they rolled them into new loans at the 1% interest rate. The amount of “new” liquidity was less than €200B.

How massive is massive?

Before LTRO2, the ECB’s balance sheet stood at €2.7 trillion – far exceeding the size of the Fed’s balance sheet in the depths of the financial crisis.See ECB’s Balance Sheet.

One further note. It is widely quoted that the rate on the LTROs is 1%. The ECB says that “The rate in these operations will be fixed at the average rate of the main refinancing operations over the life of the respective operation.” Hence, if the ECB’s short-term interest rate benchmark (known as the MRO rate) increases from its current rate of 1%, this would increase the interest rate charged to banks on the LTRO. I think it is unlikely that the MRO will substantially increase over the next three years. Even if it does, it might raise the total rate to 1.25-1.5% which is still incredibly cheap compared to the rates banks would be charged in the open market.

What is the difference between QE and LTRO?

In November 2008, the Federal Reserve embarked on a Quantitative Easing (QE) program. The idea of the program was to purchase both Mortgage Backed Securities as well as U.S. Treasuries. This action bid prices of these bonds up and reduced interest rates. The increased prices helped bank balance sheets. The lower rates helped banks reduce the cost of their lending. The lower rates trickled down to the average borrower, whether a small business or an individual.

LTRO is different. LTRO is specifically directed at European banks. The loans are made to these banks but there are no strings attached. That is, the banks can do whatever they want with the money.

Here are the possibilities:

Option 1 is what the ECB wants. The ECB is prevented from outright buying of distressed sovereigns (they are allowed to buy on the secondary market). They can achieve the same objective indirectly. They give money to the banks (well, 1% is almost giving) and the banks to the dirty work for them.

For example, Intesa Sanpaolo said today that his bank would take €24B in LTRO and invest in Italian Treasuries with maturities of three years or less.

This Carry Trade is also very profitable to the banks – as long as the system is intact (i.e. there is no meltdown of the Euro area). It is hoped that the increased profit will make these banks healthier.

As I have pointed out in previous entries, the European banks need the help. Most are insolvent.

An alternative strategy would be to massively consolidate the European banks – shuttering the ones that are the most insolvent and allocating quality assets to the relatively strong ones.

However, that is not the strategy that is being followed. Taking a page from the U.S. playbook, no one is allowed to fail. LTRO is available to any bank that can post eligible collateral.

Let’s take a step back and consider the following question. Given that we know that European banks are already too highly levered, does it make sense for them to borrow more money and then invest the borrowed money in risky sovereign debt?

Where does the money go?

Dependence on the ECB

LTRO is a sweet poison. Why should a bank go to the open market and borrow money when you can go to the trough and borrow at 1%? The LTRO creates a dependency on the ECB. The European banks have been effectively knocked out of non-European markets for funding – because foreigners realize that these banks are largely insolvent. However, how long can the ECB provide back up? How long can the ECB ignore that many of the banks are zombie? Is the next page in the playbook, the BOJ strategy of the 1990s?

I continue to believe that Europe is not dealing with its problem head on.

The bailout of Greece is a fool’s errand. The €130B and the “selectively defaulted” Greek debt does not solve the problem. Indeed, it is unbelievably naïve to think that the Greek debt to GDP will by 120.5% in 2012. It is a classic case of throwing good money at bad. What Greece needs is a massive devaluation – and that is impossible given that they are shackled to the Euro. Even a 100% repudiation of their sovereign debt would not solve the problem. They are still running massive fiscal and trade deficits and the debt would just be racked up again.

The same is true for the banks. I vote for consolidation – elimination of the weak banks and the strengthening the strong.

How risky is the ECB?

There are a number of risks. However, it is key to understand that the main lever the ECB has is the printing press. Unlike a regular corporation, if the ECB gets into trouble (their capital depleted by sovereign defaults), they could always print their way out.

First, we have already mentioned that the ECB’s holdings are far lower quality than the Fed’s holdings (for example, they are holding Greek sovereigns at par when others took a haircut). That presents a risk.

Second, another risk is the system holding together. If a number of countries exit the Euro (and they could be good countries or bad countries), that would create risk.

Third, and by far the most important, is the risk of monetization. Yes, the ECB could print their way out of a problem. However, that could manifest itself in significant inflation in the future. It is true that we don’t see it today because monetary velocity has plunged. However, at some point, velocity will recover and Euroland will be hit with a huge inflation tax. People don’t put weight on this right now because inflation is so low. But it is naïve to think that cranking the press like they are doing has no future repercussions. Inflation can be avoided only if the money is taken back and we all know that taking back is painful and hugely unpopular in the face of high unemployment.

One Response to Treating the Symptoms